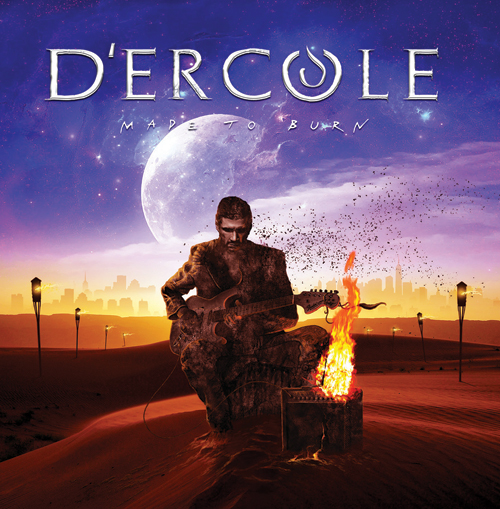 German site MusikReviews have written a piece about the new D’Ercole album Made To Burn.  Find the original here, and the Google English translation to follow:

The Dutch company Rock Company is developing rapidly into a northern European equivalent of Italian Frontiers Records. Here, too, more or less compelling albums from the field of tension AOR and Melodic Rock appear with (un-) beautiful regularity, although the quality never falls below a certain minimum level, but rarely provokes jubilation.

The American Damian D’ERCOLE – a small, because less virtuoso and bustling brother of people like David Chastain or Chris Impelliteri – and the busy solo artist or singer Phil Vincent do in the fifth joint attempt, nothing great unlike before, but “spoil “again for an hour with a strange mixture of ultra-conservative and gestelt” modern “fabric which reduces the overall impression latent.

Your fellow combatants, who already (and sometimes in conjunction with the duo themselves) in bands such as tragedy or Circular logic (which is now kool with the K, or how?) Have been doing solid groundwork, but a freestyle can the two main characters Do not offer from D’ERCOLE . Her songwriting remains just as pliant as on “The Art Of Self Destruction” of 2010 or the 2016er-predecessor “No Place Like Home” of the now available album.

This low blow sounds like halfway to early Alice In Chains, while the semi-unplugged ‘Open Your Eyes’ and the organ-refined Arena Smasher ‘Slow Motion’ are the thumbs up.

CONCLUSION: Typical United States metal with AOR rashes mates on ” Made To Burn ” with ugly concessions to a zeitgeist (grunge) that has come down as well as the one D’ERCOLE’s main aim is to uphold. The fact that in the course of the event the last studio recordings of the late guitarist David Zychek as well as scene celebrities such as Paul Sabu can be heard, as a footnote to this more shadow as a light-casting record by the way.