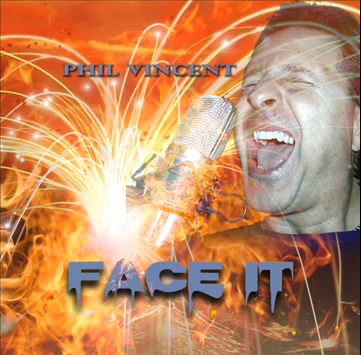 American multi-instrumentalist, vocalist and composer PHIL VINCENT is a workaholic. Where recent years has seen him joining several bands (Tragik, Circular Logik, D’Ercole and Legion) and singing on other people projects, somehow he still got some time left to continue with his solo career, started in the mid-nineties.
"Face It" is Phil’s new recording and ‘solo’ is the key word here, although his Legion buddy Vince O’Regan (Bob Catley band) shreds out a solo or two. The rest is all Mr. Vincent himself.

Primarily, Vincent is a prolific songwriter, and this was his sole intention when released his first album almost twenty years ago: work as ‘song writer artist’, but circumstances changed when received such a positive response from his own performance.
Phil Vincent does it all. He writes the songs, he sings the songs, he plays all of the instruments and produce on his CD’s, with a little help from his friends.
This dangerously could become ‘more of the same’ in all his projects, but Vincent is a skilled (and clever) composer managing to craft impactful rockers and good, varied melodies.

Of course much of the material present in "Face It" recalls his recent bands, plenty of Dokken-influenced hard rock songs with good dynamics and choruses, but also we find some of his own melodic side structurally inspired by Winger.
"Long Hard Road", the layered "Sooner Or Later" and the solid keyboard-filled "Burning Bridges" are clear examples of his penchant to write infectious tunes, while "End Of The Line" or "Make Up Your Mind" are crunchier balancing the whole thing.
Phil explores new sonic fields for him on some tracks as on the modern oriented "Can’t Go Back" and the poppy / classic rock title track "Full Circle" with good results, especially in the slightly psych progressive melody of the latter.

"Face It" is well performed, arranged and recorded by Vincent, which keeps improving his craft as ‘one man band’.
Phil is singing better and better everyday building really good multi-layered harmony vocals which adds nice nuances on all songs, and the guitar work is intense, varied, delivering meaty solos as well.
Perhaps on some tracks – particularly the heavier – the rhythm section sounds too much ‘like a wall’, but that’s a minor criticism because the important thing is always a good song, and here’s a lot of them.