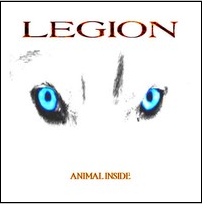 Animal Inside is the 7th studio release from Legion – the five-piece outfit fronted by Bob Catley’s guitarist Vince O’Regan and the prolific Phil Vincent. These Melodic Hard Rockers have refined slick songs, catchy hooks, and toe-tapping rhythms down to a science but somehow produce lively and upbeat music that never sounds stale or repetitious.

Legion’s lineup has remained the same since their last release, further cementing the solid teamwork that is one of the highlights of their music. Vocal dynamo Phil Vincent fronts the band, giving his performances a bit of a Dokken/Winger feel while belting out modern tunes with a clear and fiery delivery. Guitars, songwriting, and production credits go to Vince O’Regan, who once again proves he has true “guitar hero” chops. Bottom end and rhythms are provided by Gavin Cooper (Battlezone, Statetrooper) on bass, Andy Pierce on drums, and Irv Parratt on keys.

The band wastes no time when kicking off with “Fantasy” – a high-energy rocker with a blistering rhythm line. O’Regan is at the top of his rhythm and lead guitar game right off the bat. “Roll The Dice” is neat mid-tempo track highlighted by nicely layered vocals and a killer guitar break. “Only A Dream” has a bit of a Progressive Metal feel to it dealt by Parratt’s keys and a laid back vocal delivery. O’Regan manages to conjure up a bit of George Lynch on the very gritty, bluesy “Waiting For the End Of The World,” a heavy rocker and quite probably the strongest track on the album. The band changes it up a little on the ballad-like “Come Back To Me,” a track with a simple and flowing rhythm line and powerful layered vocals.