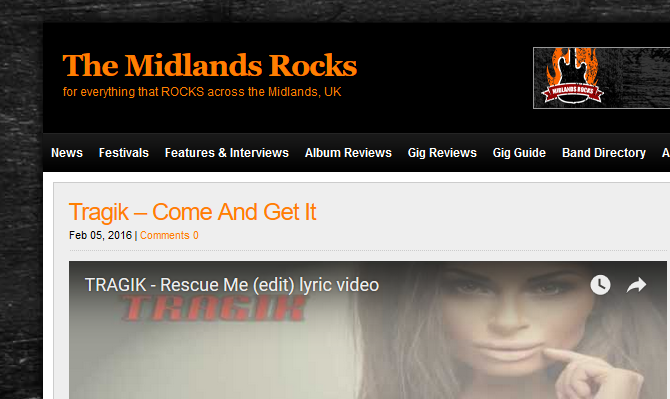 …But now, things have changed. Tragik’s sixth album bursts with a different kind of energy. Vincent has laboured for many years in the shadow of the great AOR originals, but that long apprenticeship is now yielding the kind of results that stand on their own two feet. The evidence is a batch of finely crafted songs, brimming with memorable melodies. Vincent turns it all – like the tautly stretched ‘Where Would I Be’ (a song that suddenly launches into an MOR chorus) and the appealingly plaintive ‘Someone’s Gonna Hurt You’ – into performance art, passionate, powerful. And on ‘You Are The One’ and ‘When The Darkness Falls’, he clearly knows how to do intimate too.

It’s no surprise that the music is derivative still – show me something that isn’t – so the real trick is in merging the past with the present. Vincent gets huge help from lead guitar guests Vince O’Regan and Peter Cox. To say their solos are perfectly pitched and beautifully measured suggests cold precision. That would be wrong. Both temper their axework in the heat of Vincent’s emotive, compelling delivery, adding a calculated bite and a metrical sting to his sweetly sturdy melodies, carrying their share of the load, creating light and shade. It would be difficult to overestimate their contribution.

‘Feed My Soul’ shifts the tone: It’s a long, deep rock’n’roll exhale from Vincent as he draws on AOR and grown up powerpop to stamp his songwriting authority on the music. ‘Smokin Gun’ and ‘Rescue Me – Rise To The Sun’ continue what at times seems to be a journey of exploration, here examining progrock to determine what it can add to the songs’ swirling melodic rock cadences…

Also Gabor from Strutter is impressed:

Tragik ‘Come and get it’ (Rock Company)

The history of me personally reviewing Phil Vincent records go back 20 years in time to be exact, because already in 1996 I started reviewing his music. Now many solo discs later, several side-projects, his focus nowadays is Tragik, a band he formed with guitarist Damian D’Ercole, with the help of a few session musicians on a couple of songs. However, still Phil prefers to do everything on his own, which sometimes makes it sound a bit the same after a while. Nevertheless, he does a great job and opener Where would I be of the 6th Tragik album come and get it, released on Dutch label Rock Company, this is one of his strongest melodic rocksongs in ages. The following 10 tracks are a surprise, because this new album is Phil’s best effort since his late 90s records. Highlights besides the excellent opener are the semi ballad You are the one, Someone’s gonna hurt you tonight and the hooky uptempo 80s AOR tune When the darkness falls. As usual, Phil’s love for women is shown on the cd artwork, so you have something nice to look at! Check it out for yourself if Dokken meets Stryper is your kinda melodic hardrock, more at: www.philvincentbands.com