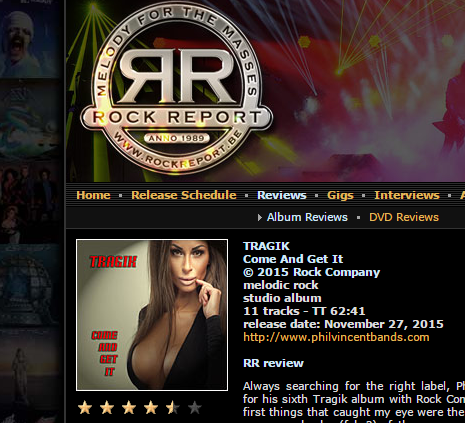 Belgium Webzine Rock Report has published a very favorable review of the latest Tragik album giving it no less that 4.5 out of 5 stars!!

Always searching for the right label, Phil Vincent found accommodation for his sixth Tragik album with Rock Company from The Netherlands. The first things that caught my eye were the voluptuous lips (botox?) and the enormous boobs (fake?) of the woman on the front cover of “Come And Get It”. Although I like attractive women, it’s beyond me why she was ‘used’ for the cover. Indeed, sex sells! But what about the music? Well, although I warned Phil in the past for overkill, I have to admit that this platter is probably the best he has written, recorded, produced and mixed under the moniker of Tragik so far. We all know by now what a workaholic Phil is, but I guess he has excelled himself on this particular album. Eleven songs, written and recorded (in his Muzik Room) between January and October of this year, pass in review and there’s something for everyone: