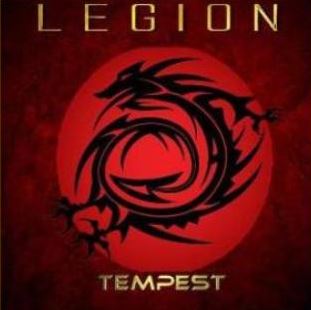 The man did it again: Phil Vincent, apart from his solo albums and other bands, is releasing a new album with LEGION entitled "Tempest", the band’s sixth in the last four years!
And the best part of it is that the quality of the material on offer seems to not decrease.

Of course, the secret with Legion is their Ace in the hole: the extremely talented partner British guitarist Vince O’Regan (Bob Catley, Escape UK). Despite being fronted by the seemingly boundless energy of Phil Vincent, Legion truly showcases the songwriting skills and massive six-string chops of O’Regan.
Musically "Tempest" is somehow a return to the sound of the two fisrt albums from the band: bouncing Hard ‘n Heavy / Melodic Hard Rock with beefed up riffs and edgy melodies.

Whilst everything Vincent has been involved with has had definite Dokken influences in there, Legion have even more and it’s also the more varied project of his career.
The thick George Lynch-like riffs and arrangements from O’Regan are definitely more ‘Tooth And Nail’ than ‘In My Dreams’ as heard in the groovy "Stealing the Night Away", "Altered State" and the galloping "Crash & Burn".

However, Vincent’s trademark vocal melodies are all over the choruses, giving most of the songs more melodic parts than the heavier verses. Check the melodic hard rock opener "Just Can’t Stop", the keyboard filled "Walking in Your Footsteps", the Lynch’s Mob like "My Sacrifice" or the highly harmonic hymn "(We Are) Legion".
That’s not to say there isn’t any variation, There’s killer melodies on "Open Fire" (somehow bringing ’80s Paul Sabu to mind), "More Than Meets the Eye" (akin Winger), and awesome clean electric guitars on the midtempo "Altered State".

Another very good and really recommended effort by Legion, "Tempest" draw heavily from the classic Dokken catalog and come out all guns a blazin’, but also delivers lethal doses of solid and enjoyable Melodic Hard Rock.
The band sounds better than ever (now with ex- Persian Risk Steve Hopgood returning on drums) delivering well structured songs and melodies that keep on playing in your mind.
A very strong sixth album from a band that really needs the right attention.
Very Recommended.