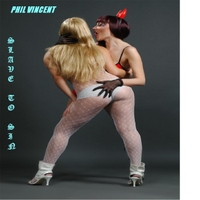 American multi-instrumentalist, vocalist and composer PHIL VINCENT is a workaholic. Where recent years has seen him joining several bands (Tragik, Circular Logik, D’Ercole and Legion) and singing on other people projects, somehow he still got some time left to continue with his solo career started in the nineties.
“Slave To Sin” is Phil’s new 2014 record and ‘solo’ is the key word here, although there’s some friends collaborating.

Phil Vincent is truly a one man band, and truth to be said, he is pretty good on all instruments. His proficiency makes it possible for him to write, arrange, perform, produce and mix all of his own music.
And the good part of if is that Phil writes very, very good melodic hard rock songs.
Primarily, Vincent is a prolific songwriter, and this was his sole intention when released his first album almost twenty years ago: work as ‘songwriter artist’, but circumstances changed when received such a positive response from his own performance.

Phil Vincent does it all. He writes the songs, he sings the songs, he plays all of the instruments and produce on his CD’s, with a little help from his friends. This dangerously could become ‘more of the same’ in all his projects, but Vincent is a skilled (and clever) composer managing to craft impactful rockers and good, varied melodies.
“Slave To Sin”, as on most of his solo recordings, features some explorations not possible in his other bands, yet always Melodic Hard Rock focused.
So, we find here modern hard rockers with an edge in “Rise”, the jumpin’ title track “Slave To Sin”, and the surprising ballad “Illusion” with acoustic guitars, pianos, and a very, very long atmospheric coda.

“Harmonic Destruction” is the longest Vincent track ever clocking 13+ minutes of epicness, grooving passages, and a middle section that in fact is another ‘inside song’ driven by a razor riff.
And of course there’s Vincent’s classic ’80s inspired tunes in the commercial “Take Me Back” with a chorus plenty of harmony vocals, the Dokken-esque (and very good) “Mystery”, the melodic hard rocker “Bad Girl” and the gentle mid-tempo “Let Me Be the One” recalling Cheap Trick.

Phil Vincent rarely disappoints, and “Slave To Sin” is another solid release from his inexhaustible musical factory.
The man knows his craft, and he’s singing better and better everyday building really good multi-layered harmony vocals on all songs, intense guitar riffs and bouncy, rightly played drums.
One minor criticism: the artwork of his solo albums (also done by himself) are becoming almost laughable… It’s time to hire a designer Phil, because the quality of your MHR music largely deserves a distinguished packaging.
Quite Recommended.