We have found a blog post about the latest Tragik album. Nice words! Here it goes: 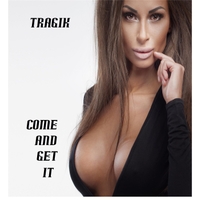 “Come and Get It” is the 6th album from TRAGIK, one of the projects / band from workaholic Phil Vincent. While Vincent announced he left his other group Legion to pursue a solo career, here’s another effort from Tragik, alongside his partner in this band, guitarist Damian D’Ercole.
Tragik is perhaps Phil Vincent’s most melodic rock band where he lends to a more personal material, even in an earnest manner than on the solo albums under his own name.
Combining massive hooks, multilayered vocals, heavy guitars, atmospheric keyboards, thunderous bass & drums, “Come and Get It” fires on all cylinders. There’s some friends contributing guitar solos to provide even more fire, such as Vince O’Regan (Legion), Peter Cox (Chinawhite) and Billy Roux (ex Tragik).
From the Foreigner-esque opener “Where Would I Be…?” to the hard rocker “Fallen Angel” (Winger come to mind) to the Journey meets Boston melodic rock of “You Are the One” (a highlight), the new Tragik album shows its ‘classic’ credentials.
“Smokin’ Gun” is another moving melodic rocker, “Smokin’ Gun” adds a hard rock groove, “Closer to the Sun” is filled with lots of harmony vocals and a sharp D’Ercole guitar work, while “Someone’s Gonna Hurt You Tonight” is a fine melodious semi-ballad with some Tyketto in it.
There’s also the quite interesting 12 minute opus “Rescue Me / Rise to the Sun” which shows Tragik’s progressive tendencies blending harder moments with melodic passages in the vein of John Elefante.

It has been said many times here on this blog, Phil Vincent never disappoints. “Come and Get It” is another solid product from his inexhaustible factory.
This new Tragik effort is varied like never before, the songs are well constructed, performed, produced & mixed. The only weak point is the dodgy artwork, but c’mon, who does not like a hot bimbo accompanying a rock album?
Strongly Recommended.

(Hint, to buy it on CD go to Rock Company)